A Tale of Two Cats

I intend to blog about Simon Theodore, aka Little Brother, aka Uncle Simon, aka The Paw, but before I tell you about him, I have to tell you about the First Cat of the Turtle Household.

Once upon a time, the Turtle had only one cat. Her name was Timmi, and she would tolerate no competition.

Some of you may be wondering about Sugar, but she was a fursibling, not a furbaby.

Timmi came from the vet, and originally from the VA. She had been adopted as a kitten from a lady who died shortly thereafter, and the family intended to have her put down. Nice family. She stayed at the vet's for 3 months before I adopted her at six months old. Yeah, real nice family. Her one redeeming feature was a long, fluffy tail.

I am a sucker for a fluffy tail. Timmi lived before smart phones, so I have very few pictures of her. She wasn't terribly photogenic anyway. I drew a lovely one and finished it in marker. This is what her soul looked like. 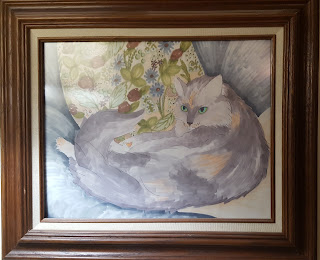 I hear Big Brother laughing at me.

Timmi was a snuggler. She wanted to be carried around like a baby, and she slept in my lap whenever I sat down. Much of Star of Justice was written with Timmi in my lap.

Timmi was a sickly cat. Around seven years old she got sick enough to stop eating, seriously enough that the liver got involved and I resorted to a feeding tube until she recovered. She used up all nine of her lives before she was done, and I am convinced that on one occasion God miraculously healed her.

Eventually, her colon stopped working, and there was nothing more to be done. Somewhere around the age of thirteen, Timmi took the Long Step and broke my heart. I think this happened in late 2004, early 2005. I'd have to check my records and I don't really want to.

I had been mourning her sickness and dreading her passing for years. I had no idea how hard it would be to lose her for real until it happened.

A house with one needy cat became a house with no cat at all. I came home every night and wept for hours, pretty much every time I sat down and she wasn't there.

Mom needed to break up her two stray Siamese sisters, so Toffee came to live with me (after an unsuccessful re-homing attempt with a former neighbor). Although Toffee was needy, she was no Timmi, and the crying continued. For months.

Posted by Robynn Tolbert at 6:26 PM