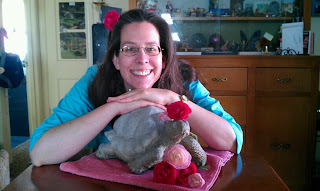 If I were a character, I'd be Raven.


- Jesus Christ is my Lord and Savior, but don't blame Him for my bad behavior. I'm a work in progress.
- I believe the Bible is inerrant and absolutely essential as an instruction manual for being human and understanding the meaning of life.
- I practice and support conservative values.
- I am a Farmville addict.
- I like cats more than dogs, but I love both.
- The Mystics from The Dark Crystal are my favorite movie Muppets.
- I prefer mutts to purebreds.
- I kept a frog for a friend. Once.
- I owned two newts and loved them both. I don't know how they felt about me.
- I like my gray hair and wish I had more of it.
- I like exercise but my house isn't big enough for the two of us.
- I sing in the bathroom.
- I do not trust scales. I judge my weight by how my clothes fit.
- I want to live to be 111. Anything after that is gravy.
- I would rather be Vulcan than Klingon.
- Cookie Monster is my favorite old Muppet.
- I am afraid of heights, even in movies.
- I don't like to travel but I do watch Globe Trekkers.
- I never fast-forward through the movie Galaxy Quest.
- I am younger than you might think and older than you might guess.
- I tend toward melancholy.
- I prefer beginnings to endings.
- I would rather be a hobbit than an elf.
- Pierre the Shrimp is my favorite new Muppet.
- My desire to play piano is greater than my skill.
- I used to draw stories as well as write them.
- I prefer things that increase in detail the more you examine them.
- I would never kill my own food but I do eat meat.
- I will never knowingly eat octopus or dolphin. Seems wrong to eat something possibly smarter than I am. Won't eat parrots, either.
- I can pick up a grain of rice with chopsticks, but who wants to eat one grain of rice?
- My home has more cats than chairs.
- I recycled before green was the new black.
- I have five active compost bins.
- I cook by putting ingredients I like into the same pot. I eat whatever comes out.
- I regularly over-stuff my soups.
- I would rather eat chocolate than vegetables.
- I think "man-made climate change" is a load of compost, and not the organic kind.
- I would rather read than vacuum.
- I believe cats have tails so I don't have to dust.
- I will not kill a spider in my house, nor knowingly allow a spider to be killed. Cockroaches are another matter entirely.