Mrs. Iguana asks if I could store the stuff I made in a used deodorant tube. Last night, I would have said, "not without altering the ratio of powder to oil" because coconut oil turns soluble rather fast in my limited experience.

This morning, I would say, "yeah, you probably could if you store it in the fridge." When I took my tub out of the fridge pre-shower for after-shower use, it required fingernails.

A Friend posted a recipe with pics similar to mine on my Wall yesterday. The last pic gave me an idea, although it actually wasn't what the pic demonstrating at all. I believe if you wrap the deodorant in plastic wrap or a plastic bag and then cool it, it would retain that shape, provided you stored it in the fridge between uses. Maybe a muffin tin? This is the next thing I will try, since two days after starting the DIY deodorant, I remain pleased with the results.

Happy Thursday, dear readers. May it not bite you. 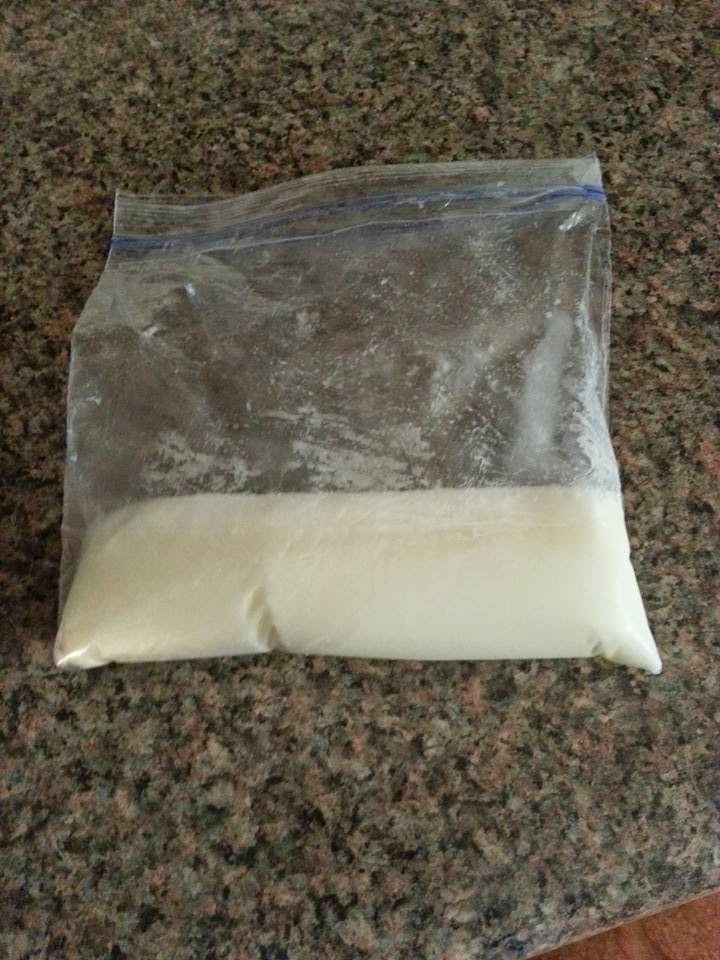 It's still warm in Kansas, so I am storing the deodorant in a plastic bag in the fridge. Solidified nicely into a "stick" and far less messy. After five days, I'm also less stinky at the end of the day than I am with the Tom's brand. I'll be using this through the Winter. We'll see how well it performs in Kansas Summer.

Posted by Robynn Tolbert at 7:02 AM No comments:

Email ThisBlogThis!Share to TwitterShare to FacebookShare to Pinterest
Labels: Recipes

Several months ago (maybe four?), I stopped using antiperspirants. I had a lot of reasons, but the final nail was a study suggesting preventing perspiration might create a link with breast cancer. Thus began the search for a smell-cancelling deodorant without antiperspirant, something currently impossible to find at Walmart.

The best I've found so far is Tom's brand deodorant from a health food store. My hippie descendant co-worker, who has never used antiperspirant, agreed this is the best she's found. It's still not enough to block the stink of the Turtle with unblocked armpit pores.

I turned my eyes to natural ingredient websites. You know, those hemp-growing, conspiracy theorists who run their computers from either solar panels or the nearest Starbucks that I both mock and respect for their refusal to care about either my mocking or my respect. I found an expensive recipe that supposedly works like magic, but I can't bring myself to spend $50 on GMO free arrowroot baking powder, even if it is the only time I'll ever have to buy it. Especially when the recipe only calls for 2 tbsp.

WGR showed me a recipe from her latest issue of Mother Earth that was cheap and easy, and therefore couldn't possibly work. Being the Turtle, I modified (pronounced BUHNgled) the recipe and kept going. Here is my modified version:


1/3 c baking soda
1/3 c corn starch
7 tbsp coconut oil
6 drops citrus oil (or any other scent, if you want scent)
I used it yesterday with good results. It wasn't a heavy sweat day, but there was no detectable odor until well after 4 PM, which beat out Tom's and could have been leftover from the clothes (I do what I can, but the Turtle sweats like a racehorse).
The biggest issue I had yesterday was the mess. Coconut oil and powder don't stay mixed, so the lotion must be shaken before applied. Then there's the lotion on the hands, which is slightly gritty and very oily, and almost required Dawn to wash off. This isn't too high a price for a non-stinky Turtle, but it's important to warn the reader.
I discovered the second problem this morning when the temp in the house dropped to 74 and the coconut oil partly solidified. I had to stir the lotion with a finger to liquefy the oil and mix the ingredients. So I guess I'll mix and store in the fridge until the temp around here drops to winter's consistent 69 degrees. That will be an unhappy few minutes every morning, but, again, not likely a deal-breaker.
Happy Wednesday, dear readers. Keep it clean.

I initially posted this with tea tree oil as an ingredient. Turns out tea tree oil has some estrogen-like properties, so applying it daily in the same area where I stopped using antiperspirants because of breast cancer concerns seems dumb. I initially added it for the antimicrobial properties. Coconut oil already has those. So does soap.

Posted by Robynn Tolbert at 7:04 AM 3 comments: