I adopted Simon from the Petsmart Adoption Program. He had been a resident of a more rural animal shelter and a foster mom enrolled him in the program to save his life. Momma Turtle met him first, and pointed him out to me. 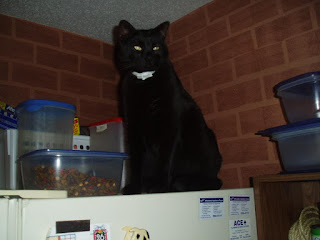 I didn't want another cat. Timmi's death had eviscerated me, and I had no desire to love anything else with fur. Since Toffee had a screw loose, I had no concerns about getting attached to her. However, there was a possibility that hanging with a more normal cat might level Toffee out, and this big black weirdo had been sitting there so long, waiting. I adopted Simon.

It was touch-and-go the first month. More than once I wondered what I had gotten myself into.

He was stand-offish. Timmi had literally been in my lap every time I sat down. Simon sat one piece of furniture away, at my eye level, and stared at me. We call it "vulturing." Sometimes this is what he wanted to do. Sometimes he wanted my attention, and if I didn't figure out the difference, he knocked pictures off the wall to explain it.

At 2 AM, he became a cuddle-whore. I've heard men are like that.

He has never met a door he didn't try to go through, or a space he didn't try to fill. More than once he spent the day in a closet I didn't realize he'd snuck into while I pulled out a coat, shirt or pair of pants. Once he almost got sealed into the bathtub while the plumber was working on it. Did you know bathtubs are hollow? Thank God for that.

He liked Hide and Seek. I would realize he wasn't staring at me or coming out for food and drop everything to search my 823 square foot house for a fifteen pound black cat who refused to help by calling back to me. More than once I feared he'd somehow snuck outside while the door was closed and locked and my back was turned. He'd be staring at me from on top of something or under something, laughing, I'm sure.

These kinds of exasperating shenanigans earned him the name Little Brother. Like the little brother who follows you around and breaks your toys and irritates the snot out of you until he falls asleep and then looks like an angel so you don't kill him.

This also led to the Simon Alvin Theodore! I would yell when he knocked something off the counter to get my attention. That was eventually shortened to Simon Theodore, which is more lyrical.

The best part is he helped me live through losing Timmi. I stopped crying every night because Simon was there to be ridiculous and exasperating and hilarious and impossible. Simon touched a different part of my heart, a part that didn't hurt. He was my little brother, not my baby, and he had needs, too. Needs involving play and eating and generally making a nuisance of himself.

Simon has been losing weight since summer, and the vet has finally found evidence of a tumor in his intestines. He's lost a pound in the last two weeks, so his time with me is short. Very, very soon, we will close this chapter together, and wait impatiently for our reunion in the sequel.

I dug his grave this last weekend, because I could feel him slipping away, and the ground will freeze soon. I wish I'd been wrong.

Posted by Robynn Tolbert at 7:19 AM