The Best Day Ever!

This will not be a repeat of Old-Fashioned Thoughts' post, but I have to say it again.
Yesterday was THE BEST DAY EVER! 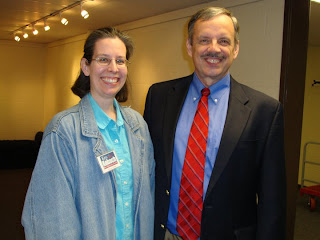 I met Kerby Anderson, one of my heroes, personally, in Kansas City. The cast and crew have been touring the country interviewing candidates and meeting the folks. I was invited to attend and allowed to sit in during the recording of the interviews, which will be aired next Wednesday on the radio show. You can listen in via computer at http://www.pointofview.net/.

You will not hear me yell "woo-hoo," although not doing so almost killed me. It would have been edited out anyway.

The only thing I can imagine being more exciting for me would have been to attend a live taping of a Friends episode, but even that kind of takes a back seat. No Friend (not even Joey) has made such an impact on my life as Kerby and Point of View.

As a secondary great part of the day, I emailed my book proposal to PYP. The month only looks to be getting busier, and you can only rearrange words so many times before they stop meaning anything at all. It was time.

So, met Kerby Anderson. Emailed book proposal. I'm exhausted from all the happy!

Posted by Robynn Tolbert at 7:32 AM