NaNoWriMo Do Ra Mi What?

Last November, Susie introduced me to the concept of NaNoWriMo - National Novel Writing Month, or something like that. It happens every November and you're supposed to write like 50K words in 30 days with certain other rules about what counts and what doesn't. It's a way to get some serious writing done by setting goals and being accountable. Why it happens in a holiday month, I don't know. I guess every month is a holiday month for somebody.

Ooh. Now I'm craving turkey. How am I going to satisfy that? Grr.

I was pretty busy last November, plus I had Star of Justice in the MLS contest and had just finished my first draft of Elementals. I wasn't in an "intense write-y" kind of place.

But over at The New Author's Fellowship, Ren Black tells me that there's a more informal March version of the NaNoWriMo concept. You can pick your word count. You can write fresh or revise. You can pretty much do what you want. I doubt they give out awards, but if the goal is to get words on the page, awards can come later, in the form of a publishing contract.

So, I'm going to do it. Why not? This March will no doubt be as wet and soggy as this winter, which means no serious gardening. I'm still waiting to hear back on Star of Justice, and I have no other markets researched yet. Elementals isn't going anywhere (technically, you're supposed to let a manuscript sit for one year before revising. It lets you see the glaring errors more easily). I wanted to get started on Past Ties; I just haven't found the time. I'll make the time in March.

I started last night. I may take a while to decide, but once I do, I act.

I pulled out all my Past Ties soundtrack cds to load to my MP3 player (I write to inspirational music, and the inspiration depends on the story). Ooh, I forgot The Bodyguard soundtrack. I'll get that loaded tonight.

(I just looked over my shoulder and Caleb is sitting in the sink. I don't know why. Now he's lying down with his chin resting on the edge.) 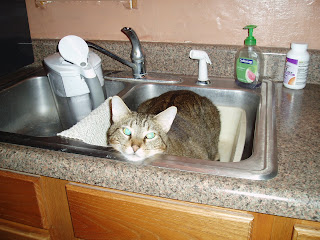 Fortunately, I had my camera handy ;) Back to post.

Here's the problem. Why is there always a problem?

Technically, you're supposed to set a word count. I don't normally write by word count. I write by "sense." I keep going until it makes sense. I also don't "over-write." I tend to write spare and add detail when I edit. I call it "sketching."

Now, some of those words were written 15 years ago and needed to be removed. I'm happier with what I have now. But it feels like going backwards. Also, you're not supposed to edit while you write these words. I get the impression you're supposed to just write, puking up your thoughts on the page and worrying about it later.

Yeah, I can't do that. I know self-editing is an issue for most authors, but I can't knowingly put something into the story that I will have to seriously correct later. I kept stopping on things like "what time of day is it in the story?," "do non-psychs know about teleportation yet and if not, how do I explain Shah's serendipitous availability?," "what airport is close to the character and would it be one that exists now or one that is created in the future?" You know, plot details that require a little thinking and possibly some research. And, yes, all these things do come up in the start of the second chapter. I can't write around them.

I've decided to write not by word count but by time. I'll devote 7-8:40 to Past Ties (God gets me at 9, so I have to have finished all my chores by then). I'll keep track of word count. I will not do research during the writing time, but I will keep track of questions I'll need to think about at other times.

We'll see how it goes.

Posted by Robynn Tolbert at 7:15 AM