The Names of Simon: Uncle Simon

The crying has stopped for the moment. It may be the top of the grief wave or dehydration, but I'll take it.

Since his diagnosis, Simon has been feeling better, which means he's behaving like a royal jackass. Rather than go to bed last night, he vultured me until I gave him food he didn't want, fell into and toppled the trash can trying to get to dog food he can't have, tipped over a box that hadn't been in that space before, and tried to pick a fight with Caleb.

I'm grateful for this. Such antics make it easier to say good-bye. The date is set.

I woke after midnight to him hogging the bed. I only got it back after I fed him.

I had two dogs when Simon came to us: Hachiko, my Akita dog-nephew, and Jasper, known to some of you through Star of Justice. Simon was fostered with three German shepherds and he loved my dogs. He was not their uncle.

He did not turn Toffee into a normal cat, but he did get along with her. They often slept close to each other, and occasionally cuddled. He was not her uncle.

When I took in the feral kids, Skuttle and Skamper, Simon took Skuttle under his paw immediately and began teaching her every rotten trick he knew. He became Uncle Simon. 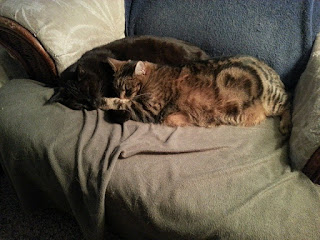 Skamper is a Mama's Boy, so it worked out.

When Simon fell behind the fridge and was too fat to either jump or squeeze out, Skuttle followed him down and stayed with him until I finally figured out where two cats could hide in my house for 40 MINUTES OF SEARCHING. I wish I'd had a phone for that pic of Simon's eye looking at me through the half inch gap between the fridge and the wall.

I'm frankly worried about the Turtle Household with Skamper in charge.

Simon watches out for Miss Kitty, too, and she is the only cat that can play with him. He is a perfect gentlemen with the girls, but he a real a$$ to the boys. Caleb takes the brunt because he and Simon are both bush cats and Caleb doesn't jump out of the way like Skamper does (Skamper is a tree cat). Before he got sick, we had a fur-flying fight every two to four weeks. There's a reason lion prides have one boy and a bunch of girls.

I used to get angry at Simon for fighting with the boys. Until I realized he was doing what Dad did for Mom in the old days by letting me know the Turtle Household was closed to new cat members. We had enough. He was absolutely right, and I have thanked him many times for being so sensible. Six cats are too many for one tiny house.

I wish he wasn't leaving us so soon, but I hope that his absence will alleviate some tension. I desperately hope Skuttle will adjust to his absence. I hope even more fervently she will not take his place as the Master of Jackassery of the family.

Posted by Robynn Tolbert at 6:57 AM