If you're my FB Friend (and pay attention), you know I've updated my wardrobe (bought pants) and updated my coiffure (dyed my hair). So, why the sudden attention to the outward appearance?

First, the changes aren't that dramatic. About once a decade I notice my clothes are too small/ too ratty/ too hard to match, and I get new clothes. That happened last week when I spent a day squeezed into 15 year old pants with snags and a button coming loose even though I've sewn it on about four times. I'd had enough and that night I bought five pairs of pants. The miracle was they were all in colors I needed. That hasn't happened in about 15 years. 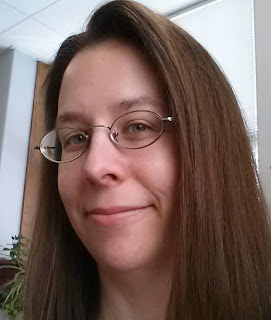 The hair isn't that dramatic, either. I cut off five inches, yes, but it's still below my shoulders and I will still put it in a bun clip most days because I hate hair touching my face. In fact, it went into a scrunchie right after I snapped this pic.

I dyed it because the leftover red from last November had turned orange and was driving me crazy. There's no way to get from orange to silver without shaving my head, so I dyed it the normal brown and the silver will come back on its own. It also cost me nothing because the house guest I've kept for the last few weeks paid for the whole thing. He's an odd looking dog, but flush.

It was weird to look in the mirror this morning. I haven't seen that kid in 20 years. I kinda wanted to slap her.

Finally, after a What Not to Wear marathon a few months ago, I remembered that an adult should project a certain image in the workplace, and I was falling down on that job. Not saying I'm turning into a fashionista. Just saying I occasionally need to clear out the old to make way for the new.

Happy Tuesday, dear readers. What's in your closet?
Posted by Robynn Tolbert at 6:51 AM