If the universe revolved around me, I'd say some Higher Power doesn't want me to grow beans this year. I'm pretty sure the four I planted outside are dead, the seven Skamper chewed on are near dead and the twelve more seeds I planted last week aren't sprouting. Even if they were, I wouldn't have a place to put them because we seem caught in the Groundhog Daymare of a cold front a week sweeping in snow and freezing temperatures. In late April. In Kansas.

In the way of humans, I'm not rejoicing that all but one pea plant is doing well. I even like peas better than beans. What I don't like is failure, and, yes, apparently I believe I have the power to make things grow.

This weekend involved a myriad of projects. The south side planting was intended to be low maintenance, but when bermuda grass is involved, there's no such thing. I've not fought it as hard as I should because I don't like being on the south side of the house. It's hot and the neighbors are weird over there. But, those neighbors are selling their house, so I need to pretty up the south side. 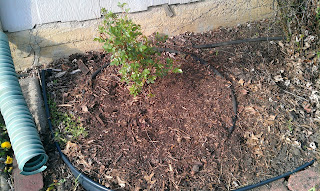 I've broken my own rule and started using grass killer. It's really the only way to keep bermuda grass in check. If you're not familiar with this Kansas jewel, bermuda grass grows anywhere, spreads through seeds and runners (both above and below ground) and can smother existing plants in less than one season. I hate it. I don't know if it's a native plant or an invasive import, but it's a pain in any gardener's back and I will do what's necessary to kill it.

The south side has barberries, a rose bush, lamb's ear (unintentional but it thrives, so I'm leaving it) and maroon chrysanthemums. The mum had split into several tiny mums so I transplanted them. Now I have to mulch and water heavily this year to keep them, but it's worth it. I'll be checking on the stupid grass anyway. 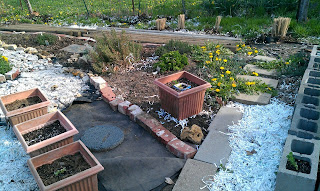 Sunday saw more transplanting. I broke up a healthy patch of lemon thyme. If the basil I planted lives (highly doubtful at this time), it also goes into the herb bed. The bees and I loved the basil last year, so I hope to triple the number of plants I put in. You can't really see the thyme in this pic, but this is the herb bed. The containers hold my "peas in a pot" seedlings. Glad they're cool weather plants. 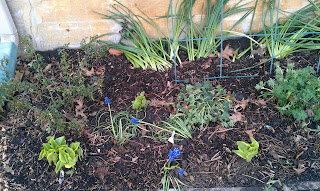 The far left plant is a pink shrub rose. I'll regret putting it here because it grows like bermuda grass and sports more thorns than your average cactus, but it survived the arborists, so I kinda respect it. The green onion looking things are daffodils. Wrong time of year, I know, but the weather thinks it's fall, so I'm going with it. I divided the grape hyacinths, too. The bright green babies are variagated hostas, and the fluffy, parsley looking things are true geraniums, bloody cranesbill by common name. The only problem is these are shade plants and this spot is no longer shady. They may all die in a month or two, but they survived last year's drought and 100+ temps, so they may not. I'll mulch the crap out of them, too.

My biggest garden concern this year is the lack of earthworms. I don't know where my little garden buddies have gone, but I've found precious few. I can only assume I'm not mulching enough to give them cool, moist earth to work. That will change this year.

Happy Monday, everybody. If you see the sun, think of me. I'll be dreaming of seeing it again.

Posted by Robynn Tolbert at 7:03 AM