I've had a love/hate relationship with weekends for a while. On the one hand, I deal with people constantly at work and my introvert nature needs some time alone to recoup (as if I could be alone in a house with six cats and a dog). On the other hand, being alone and scheduleless when you're depressed isn't always the best thing. Douglas Adams' Long, Dark Teatime of the Soul starts early on Saturday instead of mid-afternoon Sunday in the Turtle household of late.

TT: Wow, has Douglas Adams been on my mind or what? Must be the depression.

However, last weekend had the potential to go very badly and instead went rather well. I have similar hopes for this weekend as some bathroom fixing-up takes place. I have a toilet kit in my car to prove it. Oooh, need to buy "thank you" steak. Remind me, will you?

Mom has a car guy friend who has a friend who's willing to tinker on the van a bit. I'm willing to let anyone tinker on the van a bit, and I'm not drawing the line at a two-year old with a hammer. It's not like they can make it worse, and better would mean I keep it and start saving for the next vehicle that will break my sanity. So that transfer should happen this weekend, too.

Starting last night, I have a house guest, Simon the Fox Terrier, who is settling in nicely. He's an 8 year old rescue whose momma for the last four months is away this weekend offering respite for another friend with a husband dying of cancer (once again, what am I depressed about? my life is perfect!). Three cats have been brave enough to face him so far. The rest may spend the weekend in the basement. Shouldn't hurt them a bit. 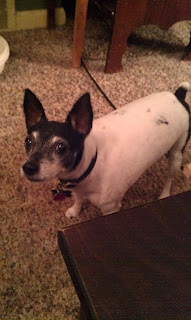 TT: Even as I write this, Skamper has ventured upstairs and watches from his perch atop the microwave. That makes four. Or three and a half.

Funny thing. Simon the Fox Terrier was running around the house all nervous, so I decided to keep him on his leash this morning until he gets used to things. He's calmed way down and is currently lying down next to me. Good idea, I guess.

One more happy thing happened yesterday. I had an idea for Price of Justice. A direction. Something that would/should happen next and the inclination to write it down. I've been waiting for that to come for a while, as you know, and I'm as thrilled as my herbally smoothed out self can be. Here's hoping I'll have a little time this weekend to try it out.

Posted by Robynn Tolbert at 7:11 AM