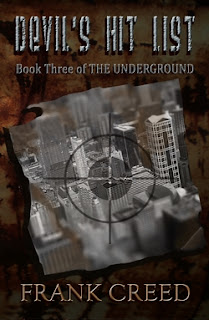 On the first floor, Vanderleer picked up Bernard, threw him over a shoulder, and hurried through the lower level bars. Bernard still grasped the briefcase.
I rushed into the holding cell area and jumped over the handrail. The bars began sliding shut.
With a burst of speed, and a slide on my knees on the slick cement floor I got my body into the electric eye that kept the steel barred gate from crushing anyone.
As I squeezed through the re-opening gate, pain exploded in my leg and I was nearly deafened by gunshots—only my reformed hearing kept my ears from ringing. Bullets from above hit my coat, and one struck me in the shin—it did not hit bone, and I thanked the Boss for a clean through-and-through shot. Apex Predator stood in the doorway holding a big ugly automatic pistol.
I limped around the corner and found the switch in the lower control office to close the bars. I pushed it in hopes it would slow those who followed. They had another switch upstairs so I knew it wouldn’t stop them. I also left a trail of blood, making finding me easy for them as a paint-by-numbers set.
After my prey I jogged, pain in every step as my reformed healing knit tissue, too slowly for my taste, but dozens of times faster than a normal person heals.
The open double doors to this control office led into an L-shaped hallway. I could go straight or right. I stood silent a moment, listening over my thumping heart. I picked up footfalls—rushing down steps—straight ahead. But I also heard breathing less than a meter around the corner.
Moving like running water, I leaned into the hall and reached out.
A sec-man waited there holding a revolver in a two handed grip.
I touched the pistol and discharged my shock glove.
I left him to his impression of spilled jelly on the floor, and ran straight. The left side of the hallway opened in an atrium to showcase a large wide stair of shallow steps that descended in a large square. Tall green plants grew upward in the square’s center from the basement level, and vines hung from flowerboxes around the ground floor.
I’d have hopped a railing here, but landing on my injured leg would hurt so bad that only my mindware would keep me from blacking out, and coming down on the granite steps could further damage me. So I limped down the square stairs, falling further and further behind my quarry, hoping nobody would appear from behind me and that nobody would pop up from below. This course put me in the basement level; considering the skills of those who chased me, a scary thought. I put off thoughts about being trapped and anxiety slipped out of its cage in my soul’s dungeon.
At the bottom of the stairs I passed through a locker room with benches and sinks. Though the room had seen use, it still smelled like new construction.
At the room’s far end, double doors swung slightly. Staccato automatic gunfire sounded from their far side. I still had my pistols out.
I cracked one of the doors open. From here I could see the elevator, again. Boot steps rushed toward me and I backed around the corner. A six-man squad burst through the double doors like the Devil was behind them.
Wherever I saw skin—the backs of hands, foreheads, necks—my targeting system went to work. Pop, pop, pop, I gunned them down before they even realized I was there.
I reloaded fresh clips into my pistols and eased the door open, scanning for more targets. There were none.
In front of the elevator lay Bernard’s briefcase. Thrill also escaped its cage and I scooped up the treasure. The CV Frankenstein might get away from me, but this was a nice score.
The station’s underground parking area was mostly filled with new security vans. An overhead door trundled open, and my prey, in a van, sped toward it… escaping.
Full automatic machine-gun fire, roared a long burst.
A tiny tank shot at the vehicle’s tires, but the bullets had no effect. The bulletproof sec-vans must run solid rubber on their wheels.
Then the thirty-caliber Browning turret turned slowly toward me. I stepped slightly to the side of its aim. Howdy partner, I said, not really able to guess if it was Legacy or Barren inside.
Hey, CK, need a set of wheels? asked Barren. 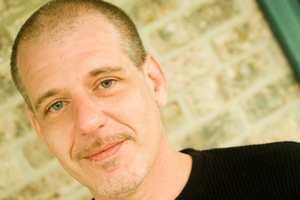 Hang out with Frank: