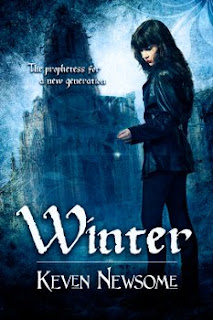 No, not the season.
Keven Newsome, aka Gungho Iguana, aka founder of The New Authors' Fellowship, landed a publisher! Grace Bridges of Splashdown Books started a subsidiary press called Splashdown Darkwater and Winter is its first release.

If you don't remember, Keven and I competed during the 2009 MLS Premise Contest. Winter made it one more level than Star of Justice (and Diane Graham's I Am Ocilla beat us both and sent us cryin' to our mommas). Keven has actively, aggressively pursued publication ever since, and his tenacity has paid off.

Here's the book trailer. This is the first time I've seen it, and I must say...it's faaaaabulous (those of you old enough to remember Max Headroom can supply the accent).

Official release date is June 1. They're trying for 1000 copies sold in that first week. Guess I'll have to get my order in, eh?

Cover art by Holly Heisey, subject photography by the lovely DeAnna Newsome, aka mrsmusicnerd, and Mary Rochelle Unsworth as Winter.

Posted by Robynn Tolbert at 6:44 AM