I started the new writing schedule yesterday morning. I would not call it a success. I did edit, but not with the single-minded attention I want. Part of that might have been my preoccupation with potential weather issues. I also started this post last night, but got interrupted by life and abandoned it. That's no good. I intended to try morning writing time at least until the end of the month, but now I'm not sure.

I don't do well with "appointments." I can't think of another word for it, except possibly "deadlines," but that doesn't fully connote the problem. I'm actually very good with deadlines.

In my teen years, I took voice lessons at 3 PM on Saturday. I was unable to do anything on Saturday until after the lesson. Knowing I had an "appointment" later that day distracted and unsettled me (one of the reasons I made a terrible case manager).

Writing in the morning brings out that same anxiety. I turn off the radio, which is how I measure time in the morning, and I can't focus on the work because I keep glancing at the clock. I do have a day job and I can't be late for it. Well, not terribly late.

The thunderstorm has arrived. Best wrap this up.

Now that I have turned off the electronics while I edit (something I knew I should do but didn't), I see extraneous words as I enter Glorya's first 3 chapters. Lots of extraneous words.

I'd sent The Lioness some chapters to read, but I emailed her not to bother with them. I'm slashing whole paragraphs right now. The plot won't change but its descriptions sure will.

TT: Simon is attacking a throw rug. It's adorable and quite distracting. Excuse me a moment...

Thank you. He's such a noodlehead. Now he's getting into the trash can. I don't know why. He doesn't fit. 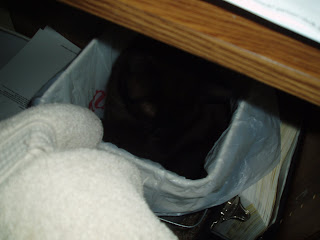 Must be the weather. He's inside the trash can looking down. The lighter spot is his ear canal. My apologies if you can't make him out. He's a black cat in a dark space. I did the best I could with Elder Brother's borrowed digital camera.

I will make time to write. It just may not be in wee hours of the AM.

Posted by Robynn Tolbert at 6:54 AM