Last week, I mentioned the sleeping cats who got to stay home while I went out to earn their daily bread. Just before I left, I snapped a few photos. 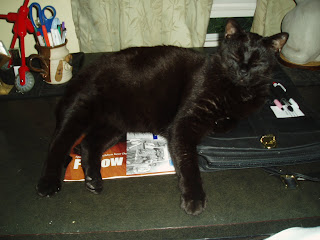 Simon woke up for his picture. He was kind enough not to move. 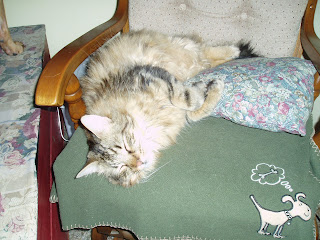 Skamper did not wake up. He is well-accustomed to having his picture taken. He's the most photogenic of the house. It's a good thing, too, or no one would believe he exists, since he hides when humans other than me come into the house. 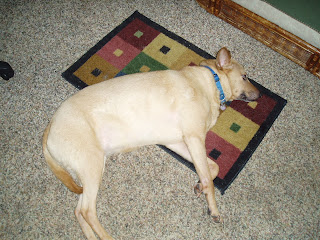 Sweetie hates the camera, but she was sound asleep when I started. If the camera were a little faster, her eyes would have been closed. 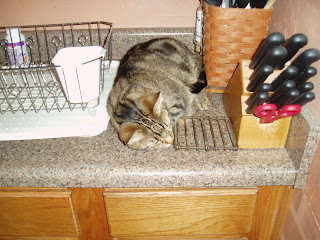 Skuttle has started sleeping here since the weather warmed up a bit. Three years she's lived with me, and I've never seen her do this before. Cats continually surprise you if you pay attention. 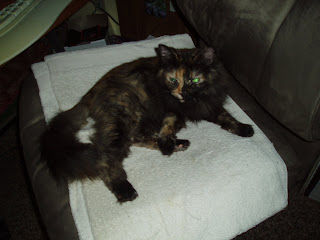 And Mica was just nodding off. I'd been in that chair prior to the picture taking. I ran out of memory or I would have shown you Caleb staring out the kitchen window. Toffee vanished when I took the dog's picture. She doesn't like the camera, either.

On the day I get to stay home - you know, Saturday - they all end up in my room for their naps. It's odd. I have a small house, yes, but they could be anywhere in it. Turns out, they generally pick spots within 10 feet of me. It's flattering. Some days it's annoying, but mostly, it's flattering.

Posted by Robynn Tolbert at 8:20 PM